Relating to the Orthodox in Russia 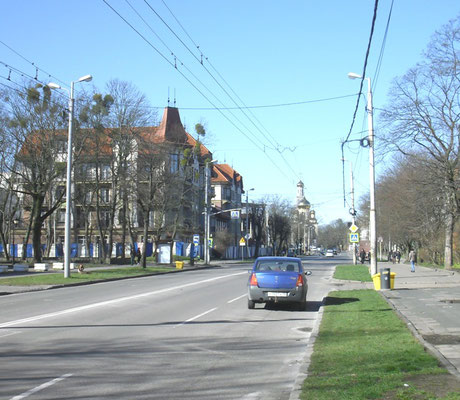 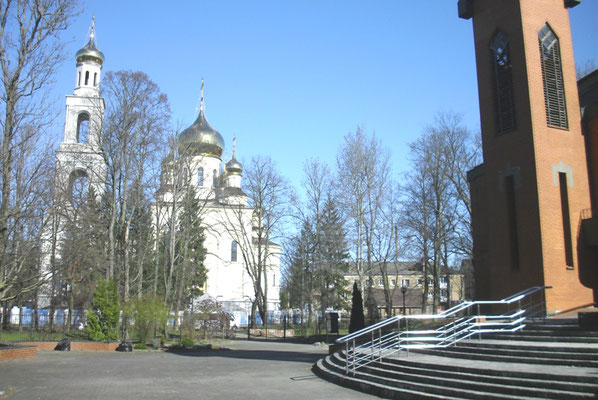 The Stronger the Pressure, the Higher the Steeple

How should Protestants relate to an obstinate state?

1. The new Orthodox church on Prospekt Mira viewed from the east.

2. “Resurrection Church” in the foreground, the Orthodox one on the other side of the street.

L a d u s h k i n – Following a visit in Moscow in late February, a German-Russian pastor and journalist from Germany criticised the stance of Russian Baptists in the currently troubled situation. In his article from 10 March, which was also published on Protestant websites in Russia, Andreas Patz cited a pastor from the wide expanses of Russia. After describing the 40-or-so trials that had been held against congregations in his region, he exulted: “We in our country have unprecedented freedom to evangelise!” The quote from Patz: “Most interesting is the fact that the pastor’s statement was complete honest, without a touch of sarcasm.“

According to Patz, the Baptists accused themselves after the state cancelled the registration of its Moscow seminar on 27 February 2020. It is indeed the oldest and most renowned evangelical seminary in the country. Baptists frequently also attribute their minimal church growth to their own lack of spiritual vitality.

According to the writer, government sanctions are trivialized. After 110 years of doing so, a church on the Black Sea has been prohibited from baptising in the ocean. A neighbouring congregation shied away from a struggle with municipal authorities and quickly proposed renting an inflatable pool and setting it up in a park.

Patz reported on the elation Baptists felt after being invited to an Orthodox consultation on recent changes in the constitution. Their report spoke of “satisfaction”, “confirmation” and “support”. Evangelicals apparently enjoy standing shoulder-to-shoulder with their tormentors on issues of morality and tradition. One appreciates being noticed at all. One is grateful for that amount of limited freedom still available to evangelical communities.

Without mentioning him by name, the author criticizes Peter Mitskevich, the Baptist Union’s president, for being soft on the Orthodox. Even within the walls of a seminary which had just lost its registration, the President only spoke of the identity and self-understanding of Russian Baptists. This refers to Mitskevich’s talk at the seminary of Sergey Ryakhovsky’s church union, the “Associated Russian Union of Christians of Evangelical-Pentecostal Faith” (ROSKhVE), on 28 February.

In closing, Patz referred to a fable from Dmitry Mamin-Sibiryak about a once-injured duck which had forgotten during the recovery process that it was capable of flying. In the spring, a voracious fox draws ever-tighter circles on the ice around the duck, and unless a melting of the ice occurs in time, the fox will be enjoying a delicious meal. Entirely voluntarily, the churches are hampering themselves with lethal self-restrictions.

Andreas Patz, born in the USSR in 1966, emigrated to Germany in 1989. He lives in western Germany not far from Luxembourg and pastors a Russian-émigré church in Birkenfeld. Well-known as a journalist in the Baptist circles of Russia and Ukraine, he is relatively unknown in Germany. This is due to the fact that he publishes almost exclusively in Russian; this article too appeared only in Russian.

Westerners such as Pastor Patz venture onto thin ice when they from a safe distance call on Russians to resist. That criticism was often heard in the German Democratic Republic: People sitting high-and-dry intended to instruct those in the GDR subjected to real danger.

But that portrayal is probably incomplete: Would those sitting high-and-dry remain dry if they took the side of those among the world’s needy (the Iranians, Venezuelans, North Koreans, etc.) presently on the receiving end of lethal sanctions stemming from the West’s sole superpower? Their “golden cage” would then surely be less dry. But for a Westerner who only gets active for foreign, distant causes while remaining passive on burning home-grown issues, the above portrayal remains valid. I do not know whether this description would fit for Andreas Patz.

Quoting from Roman Lunkin, a religion scholar in Moscow, Patz reports on an „Orthodox Protestantism“. Patz claims Protestants are “much more pro-government than their Orthodox compatriots”. In view of the spectacular differences in size, a thesis such as this one is reckless – can elephants be compared to mice? And in view of the broad variety of views among the Orthodox – can one even speak of an Orthodox position on political questions? The Orthodox hierarchy itself is hardly unified on numerous issues. And would it be reprehensible if Baptists became “more Orthodox”? Not necessary - one would need to define the term “Orthodox”.

It is claimed that that the mice are more present than the so-called elephant in the Russian Far East. Indeed, on a world scale, Protestants clearly do outnumber the Orthodox. Yet when it comes to public regard and political clout within Russia, the Protestants could very well be compared to a mouse. And this is more true than ever in view of the massive emigration of the last 45 years. (“Mouse” sounds untasty – “chipmunk” or “goat” would seem better. My concern is strictly to describe a difference in size.)

Kaliningrad’s „Prospect Mira“ features the attractive Lutheran „Resurrection Church“ completed in 1999. Just across the road, an Orthodox church towering over everything is nearing completion. From a kilometre away, only golden onion domes can be seen (see photos). The view is almost threatening, for the aging, faithful-but-small crowd of Lutherans next-door threatens no one. Does this small gathering justify such a major investment by the Orthodox? Indeed, one must concede that the already-aging Lutheran structure cannot be described as modest. The new church is named: „Church of the Great Martyr Catherine“. She lived supposedly during the 4th century.

The matter involves a defensive reaction common within the Russian nation: When Protestants plug an attractive building into the landscape, the Orthodox will respond by at least placing a small chapel in the vicinity. A “counter church” similar in size has appeared further east in Gussev, where the small, Lutheran “Salzburg Church” is located. That mindset is not new: In the 14th century, the freshly-arrived Crusaders used their imposing buildings to make a clear statement vis à vis the native Baltic peoples.

We must take the context seriously. Very rarely does a totally unknown monster arrive fully unexpectedly in the public arena. Resistance is not an unfathomable appearance from nowhere; it is caused by something. Politics are essentially a never-ending chain of reactions – one could also speak of a network of reactions. There are understandable reasons for North Korea’s misbehaviour during the last six decades. And Western Europe has attacked Russia multiple times since the outset of the 19th century.

Let’s liberate the Russians from their fear. With trust-building measures – coupled with honesty - we can “grab into the spokes” of the wheel (Bonhoeffer) roaring towards destruction. That won’t be easy: The Protestant reputation in Russia has seen better days and we have scary friends. Even during the current Corona crisis, the Presbyterian US-Secretary of State, Mike Pompeo, upholds massive sanctions against Iran, Venezuela and Cuba. And beyond the trenches in Big-Ukraine, more than a few Protestants remain committed to the elimination of the small states of Donetsk and Lugansk by military force. They include the powerful, Baptist chief of security, Oleksandr Turchynov. One can make progress with the Russians only by clearly rejecting such ambitions.

Of course, confessions usually find themselves on both sides of political barricades. It was Orthodox (Kiev Patriarchy) and Greek-Catholics beholden to the Vatican who literally donated ammunition for the war in eastern Ukraine (see our release of 31 December 2014). Yet in the Russian state-church context, elephants have more lee-way than mice.

One can claim, also in church politics, that successful politics consist of administering the carrot and the stick in varying and proper amounts, both being necessary. Yet the mice are limited to using carrots when an Eastern country no longer has interest in Western blessing. That was the situation in China around 1950: Only through agreements within the country, only through church concessions regarding the new, revolutionary state, was a public presence of the church feasible. The West had spent all its capital; the church was reduced to calling on God’s - and the state’s – mercy. In those days in China, the mouse had no stick at its disposal.

Thankfully, things have not progressed that far in Russia. In numerous instances, the opinions of the West remain important to Russia. That equips the Protestants of Russia with additional clout.

Let’s push for improving the weather. We must demonstrate to the Russian public that we Protestants are for peace and conciliation. In the West, we can push for arms agreements at the negotiating table, if necessary, even on the streets. And we would not do so out of cold. strategic calculation, but rather because negotiations, peace and reconciliation are that which God wants.

Pastor Patz is not wrong on everything. It is troubling when a congregation quickly reconciles itself to placing an inflatable pool in a park. But it is not ludicrous when the mouse celebrates an invitation from the elephant. That’s permissible for the mouse; it’s also often an expression of recognition on the part of the elephant. There are innumerable examples in which the elephant truly appreciated a visit from the mouse. May we become better acquainted with one another. Creating trust – an approach with promise.

A journalistic release for which the author is solely responsible. It is informational in character and does not express the official position of any church organisation. This release may be reprinted free-of-charge if the source is cited. Release #20-08, 1.541 words.

Commentary of an evangelical pastor and former citizen of the GDR who has read this text. She knew the GDR well and experienced all the shenanigans which occurred thereafter. “Whether justified or not – human judgement is easily changed. We therefore should not judge and should rather leave the judging to God. It is simply best to stay true to oneself and honest in one’s dealings with others. But that requires courage.”