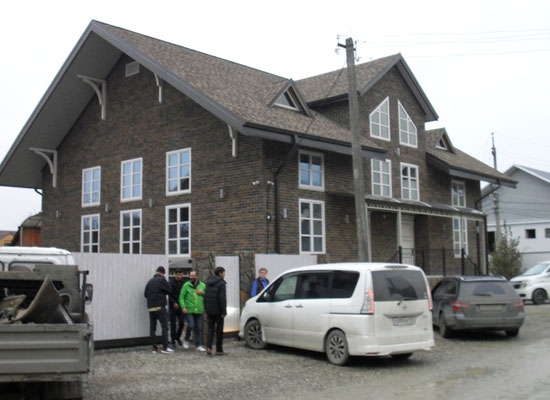 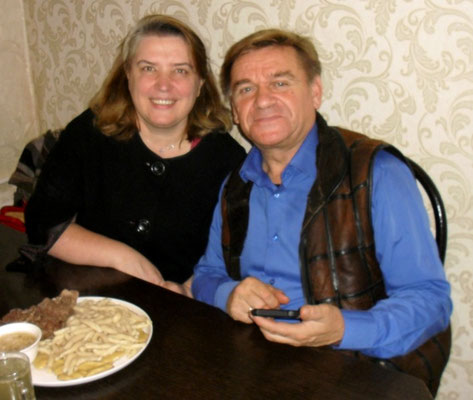 The new Baptist chapel in Grosny on 22 November 2020

Ruvim and Tatyana Voloshin in Grosny on 21 November 2020

A Foreign Country within Russia’s Own Borders

Report on a visit to the Baptist church in Grosny/Chechnya

L a d u s h k i n -- It was not until I hit Grosny that I read the US-embassy’s travel advisory for the region. It had stated on 6 August 2020: “Do Not Travel to the North Caucasus, including Chechnya and Mount Elbrus, due to terrorism, kidnapping and the risk of civil unrest.”

Tatyana, the spouse of Baptist pastor Ruvim Voloshin, stated in Grosny on 21 November: “I love it here; I am so happy that we are here! People are kind; I love my work. We are so happy that God has brought us here.” The Voloshin family with its seven children is putting down roots. They arrived in Grosny six years ago and are now building a sizeable house for the family.

Chechnya still is a kind of political hotspot, but I and my US-American passport were essentially waved through. The only questions dealt with Covid-19. The natives asked me repeatedly: “How do you like Russia?” Amazingly, they were asking about Grosny, not Moscow. Yet it was the Russian regime of Boris Yeltsin that flattened the city. In 2000, Grosny was considered the most heavily destroyed city in Europe since WW II.

In 1992, the English-language “Moscow News” insisted that Chechens were “universally for independence”. Separatist strongman Dzhokhar Dudayev, killed by Russian forces in 1996, had garnered 90% of the vote in the elections of September 1991. But now, all signs are in Russian and schools teach in Russian.

The deportations to Kazakhstan in February 1944 remain a painful memory; the majority of Chechens were not permitted to return to their homeland until 1957. Most responsible for those measures was Josef Stalin, a communist from neighbouring Georgia. Orthodox Georgians and Muslim Chechens have been at loggerheads for centuries; Chechnya was forcibly incorporated into the Russian empire in 1864.

Chechnya has experienced waves of migration over the past 100 years. In 1939 the region had been 58% Chechen. In 1959, after the vast majority had returned from deportation, the region was still only 40% Chechen. Today, Chechnya is 97,4% Chechen. Russians began to flee when hostilities flared in 1991. The current Russian population is miniscule: 16.382 persons or 0,9%. Russians had been almost 25% of the population in 1989.

There has been an astonishing transition in the feelings toward Russians during the past one-and-a-half decades. Russians, especially tech specialists, are now said to be highly welcome. Photos of leader Ramzan Kadyrov with Vladimir Putin, sometimes including Ramzan’s murdered father Akhmad, are highly visible in the region.

Ruvim Voloshin regards Beslan in the neighbouring republic of North Ossetia as a prime example of how not to do reconciliation. According to him, a memorial there is playing an unintentional role in keeping the heritage of hate alive. In September 2004, ca. 331 persons, most of them children, had died in a terrorist attack on a heavily Christian school. Beslan is only 15 km north of the relative Baptist stronghold of Vladikavkas.

Chechnya has gone a different route: Russian capital and Chechen muscles have raced to erase virtually all the scars of war. Eliminating visible scars and constructing incredible, futuristic buildings are believed to speed the process of reconciliation. Voloshin adds: “We now have asphalt roads in the countryside where earlier there were only sandy paths.” Grosny – like the USA – is a car-friendly city.

In Grosny, one can marvel at the impressive “Akhmad Kadyrov Mosque” of 2008. But if one turns around 180 degrees, a cross on top of the Orthodox church roughly 500 metres away pops into view. That’s the “Church of the Archangel Mikhail” from 1892.

Ruvim Voloshin believes religiosity runs much deeper in Chechnya than in a relatively liberal Muslim republic such as Tatarstan. “Religion is not superficial here; it is not done simply for appearances. It’s the family that keeps its members in line spiritually, there’s no need for the state to do so.” Little smoking and no public drinking is to be seen; the Baptist pastor admits that moral standards among these Muslims are not lower than among Baptists. I wonder whether this religious fervour is a mark of the neophyte late-comer. Chechens became Muslim only between the 17th and 19th centuries.

Concerning money, many Chechens are extremely conscientious. In one case, my taxi driver insisted on returning the 17 roubles change on a fee of 183 roubles (1,65 Euros).

Thanks to the historically-large non-Chechen population, Grosny has had a Baptist church since 1885 with as many as 300 members. Yet during the recent wars, attendance dropped to 11. All of these were elderly women; they are no longer living, or no longer living in Grosny. Voloshin notes that the church building, except for a few window panes, was not damaged during the war. Even in this instance, a Russian soldier later apologised for damaging a house of God.

Yet the building was unstable, no longer vertical and needed to be torn down. After a construction period of only a year, a brand new chapel was completed on the same property in late 2019. The new structure has room for 150 persons; attendance is running at roughly 25. A virtually new guest house is located next door.

The Baptists of Russia my have little gold, but they do have golden hands and Grosny has caught the fancy of the national Baptist community. They want to recover what once was. The pastor notes that a worker brigade from Bryansk in the West completed the foundation; Moldova brigades constructed the walls and roof. The church from Vladikavkas did the painting; others, including Krasnodar and Maikop, did electricity, heating and the floors.

The current small congregation consists at least of Russians, Moldovans, Armenians and Ukrainians. Roma, some of whom have fled poverty in Moldova, play an important role. One of them explained: “We can live anywhere where God is.” The pastor is very open for conversation and prayer with anyone – one´s nationality does not need to be clarified ahead-of-time. He gives short shrift to the provincialities of recent times, describing himself as a “Soviet Christian”. Voloshin was born in Moldova of a Russian mother and a Ukrainian father, noting that such constellations were never considered an ethnic mixture until three decades ago.

Ruvim Voloshin began his church work as a missionary in the Far Eastern city of Chita, moving to Moscow in 1996. There he served in the missions department of the Russian Baptist Union for 18 years before transitioning to Grosny in 2014. Several new members of the congregation have moved in from Novosibirsk.

In Christian terms, Grosny is clearly diaspora. The only registered Protestant community is this Baptist one. The pastor describes relations with the local Orthodox priest, Amvrosyi (Marchenko), as cordial. At least three members of the Baptist congregation are school teachers. In one instance, a Baptist teacher was given the opportunity to pray with her pupils. It was only requested that she pray, Muslim-style, with her palms turned upwards. Not every Chechen can be considered a Muslim; a communist party still exists. Its leader, Duma deputy Muhmad Askhabov, was ambushed and killed in August 2017. Grosny has no Roman-Catholic congregation, but Jews are hoping to build a synagogue.

Voloshin is not in favour of actions which he would describe as provocative: common public prayer with Muslims, joint processions or overt mission. He does not believe one should ruffle inter-religious relationships unnecessarily.

The Baptist pastor is very hesitant to produce a global moral assessment and judgement on Ramzan Kadyrov. This leader incidentally has a number of Protestant acquaintances, including Moscow Baptist Vitaly Vlasenko and the US-boxer Mike Tyson. (See our release from 7 April 2009 under “Interconfessional”.) The same is true for the work of Anna Politkovskaya, a human rights activist during the Chechen wars murdered in Moscow in 2006. “Those dealing in human rights need a legal education,” Voloshin insists. “I don’t have a mandate for everything. My task is to teach those who want to hear about Christ.”

Very few things are worse than war and Voloshin concedes that the duo of Ramzan Kadyrov and Vladimir Putin is far superior to war and anarchy. They have not ushered in a utopia, but they have brought peace. “Look at Libya today”, the Baptist adds. “Life with Gaddafi was much better than the current chaos.” My conclusion: Considering the hell that was Chechnya 20 years ago, Grosny is indeed a remarkable success story.

But also in Chechnya, the hopes of a better life beyond the borders of Russia are not dead. One young Muslim described to me his dreams of moving to Manhattan. I tried to break the news to him softly that much of New York City looks far worse than the ruin-free city of Grosny.

Ruvim Voloshin worries that some Ukrainian believers in the vicinity of his original home turf may be spiritually immature: “The spiritually-mature person struggles for the kingdom of God, and that is not a territorial matter. I. John 1 does not permit enmity between Christian brethren.” Yet he understands the pain of Ukrainians who have suffered through their war and believes “Ukrainians will rediscover within themselves the true depths of Christian faith and be able to forgive others.”

Chechnya is indeed a kind of success story – but certainly not for everyone. Feminism and gender changes are not welcome and homosexuals would be well-advised to emigrate immediately. The land has neither punks nor graffiti; local women are usually covered in black. Indeed, the relative achievements of this model call into question the basic, dearly-held tenets of secular, Western-style liberalism. (Which also happens be the current expression of historic, Western imperialism.) And Muslim “terrorism”, as we know it, has suffered a significant defeat here.

Pastor Voloshin believes history points to a long list of respected and successful authoritarian leaders. Russia’s Peter the Great and Catherine the Great would be among them. Kadyrov too may express some of their good and bad traits. “Those of us who live here find Kadyrov’s leadership to be essentially positive. If God has placed him into office, then it is our task to deal with that as best we can.”

I personally am reminded of Eric Li, a businessman and political commentator in Shanghai: “Each nation can only find its own route to happiness and success – no one political size fits all.”

On 23 November I arrived back at Moscow’s Vnukovo airport. Entering the arrivals hall, I nearly crashed into a young couple engaged in passionate forms of greeting. I was clearly back in the cultural West.

A journalistic release for which only the author is responsible. It is informational in character and does not express the official position of any church organisation. This release may be reprinted free-of-charge if the source is cited. Release #20-22, 1.780 words.