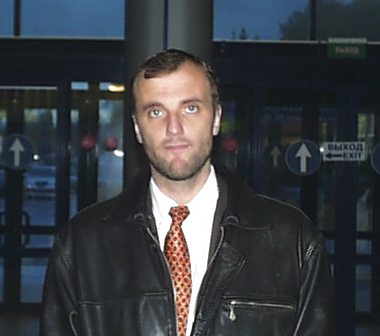 Andrey Peters has Died in Siberia

Photo was taken by the author at Novosibirsk airport on 10 October 2006.

N o v o s i b i r s k -- After a six-month illness, Siberia’s last General Conference, „Church Mennonite” pastor died of cancer on 3 March 2020. That sad fact only became known outside of Siberia and Germany a year later. Though lacking formal theological training, Andrey (Heinrich) Vassilovich Peters had been passionately interested in the faith and dedicated his life to serving as a pastor. Known for his boisterous laugh, Andrey was a vibrant singer as well as a gifted and attentive conversationalist.

The only son of Willy (Vassily) (1940-2016) and Maria Peters (born 1941), Andrey was born in Angarsk near Irkutsk on 22 October 1970. Three years later, Willy and Maria moved their family to Berdsk just south of Novosibirsk, where Maria had spent her formative years after World War II. (See our release on Willy’s death from 19 July 2018.) Andrey has two sisters: Anna Fomenko and Ekaterina (Katya) Peters, the latter still residing in Berdsk.

Due to emigration, Andrey’s career as a church worker already began in 1988 when he became choir director of the once 400-member Novosibirsk congregation. Willy, an electrician by profession, became the church’s head pastor in 1990. When his father’s health declined, Andrey became increasingly active as a pastor and was ordained in 2000. That was also the year in which Andrey paid his sole visit to Germany.

During his most active years after 2000, Andrey had founded and served as chief editor of a non-denominational paper called “Put Spasenia” (Way of Salvation), which was less conventional than the name would indicate. Andrey was then active as a circuit-rider, also visiting remote Lutheran and Baptist congregations. Later in Novosibirsk, he was active with an Adventist and a Messianic Jewish congregation.

Andrey married Elena Pankratz of Neudachino in 1992; the couple had four children in close succession. Andrey later became estranged from his wife and spent the years after 2005 residing in the Novosibirsk church building. Lena had previously returned to the home place in Neudachino. The two were reconciled during his final illness; Andrey’s death and internment took place in Neudachino.

Since his death, nearly the entire Peters family, including the matriarch Maria, has moved to Neudachino. The oldest of Andrey’s three sons, Jakob, is a farmer and resides in Solntsevka to the west of Omsk. (Neudachino is located east of Omsk near Tatarsk on the Western fringe of Novosibirsk region.)

What does the future hold for Siberia’s tiny group of Church Mennonites? In recent years, relationships between the Peters group and an independently-registered Mennonite-Brethren congregation in Solntsevka have improved significantly. That several-hundred-strong congregation is now headed by Andrey Siemens, whose oldest child, Lena, is married to Jakob Peters. Siemens also officiated at Andrey Peters´ funeral. Otherwise, contacts between Siberia’s (much larger) Mennonite-Brethren and the Church Mennonite group in Neudachino remain sparse. Criticized for its teachings on universal salvation, the Solntsevka congregation was long headed by Philip Friesen, who died in 2018.

The Mennonite house of prayer in Novosibirsk is now being used by a Messianic Jewish group which had being holding some services jointly with the Mennonites prior to Andrey’s passing. Several other small Church Mennonite groups in Western Siberia have found a home among Baptists. In the recent past, Andrey Peters’ second son, Abram, has shown signs of possible leadership. He is now married with two children, resides in Neudachino and works as a crossing guard for Russian Railways.

The historian Peter Epp of Issilkul sees no real future for the Church Mennonite movement in Siberia. He notes that Church Mennonites have also begun baptising through immersion: “Church Mennonites are no longer that which they once were.” Epp sees the last real differences among the Russian-German congregations in Germany. In some instances, Mennonite-Brethren congregations there have demanded the re-baptising of membership candidates who had only been sprinkled.

Nevertheless, the very real contribution to the church by Andrey Peters in this century will remain unforgotten. The Peters family never forsook those who remained in Russia.

A journalistic release for which only the author is responsible. It is informational in character and does not express the official position of any church organisation. This release may be reprinted free-of-charge if the source is cited. Release #21-11, 655 words.