Conversation with a Siberian "Barefoot Historian" 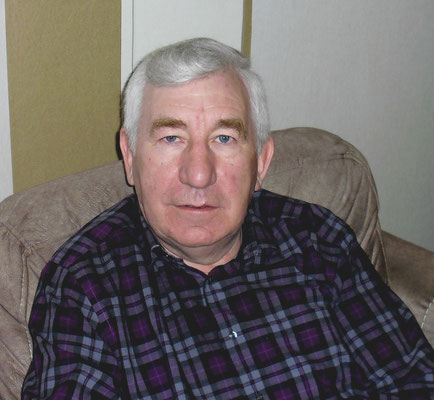 The Main Problem is Our Lack of Zeal

N o v o s i b i r s k -- Born in Apollonovka in 1960, Peter Epp was the oldest of nine children in a Mennonite family. In addition to his parents, three of his siblings now live in Germany. His youngest brother, David, returned to Siberia after four years in Germany and is now an agricultural entrepreneur in Apollonovka.

Peter Epp published a very comprehensive documentation about the “Omsk Brotherhood” in 2007; four years later, a work about his home village of Apollonovka. These two books prove that this lay historian is an expert in his field.

In his work "In Siberian Palestine", published in 2019, the Omsk church historian Constantine Prokhorov describes the Protestant developments in Western Siberia in the years 1890-1941. All three books were published in Russian by the German "Samenkorn” publishing house.

This conversation, conducted in High German, took place on 19 April 2021 in Issilkul/Western Siberia.

You are not only a historian. What is your profession? Are you also a pastor?

I am an assistant of the pastor. In my youth there was little choice, so I became a blacksmith. Now I own a small metalworking company with a few employees.

Why is church history important to you?

History has always interested me. My grandmother always told many stories - she lived in the time when there were no collective farms. What was it like in the old days? Who are the Low Germans? Where do they come from? These questions always challenged me.

My grandmother said we were from Holland. When I was 14 years old and supposed to get an identity card, I gave "Dutch" as my nationality. But that didn't get through - in Russia, we all call ourselves Germans.

When I came to the church, there was also the question: Where does the church come from? In the 70s and 80s we had no materials on this. We knew nothing. Then I found essays from the 60s in the booklets of the (registered) Baptist Union, the "Bratski Vestnik. I collected everything and copied it down. That was my first church history ever - from the time of the Apostles until today. When we did the first Bible courses, these booklets were our church history.

Then I asked Nikolay Dikman, our leading brother at the time from Maryanovka, if he had any information about the Mennonites. He then gave me a very rare book from Canada by my relative, Peter Rahn. He had published a book in German in 1975: "Mennonites in the Region of Omsk". But he also described how the Mennonites came to Siberia in the first place.

This book was the beginning of my own research into our history. In 1996 there was a major anniversary and the idea was launched to write a book. It was published in 2007.

The Omsk Brotherhood, to which your congregation and Apollonovka belong, was founded in 1957. Is this union of 30 congregations registered with the state? They are not the "Soviet Tserkvei" (“Union of Churches”, the unregistered Union of Evangelical Christians-Baptists).

In a word: No. The question of registration was major in the 1960s - at that time there was great tension between the Soviet Tserkvei and the registered Baptist Union (the All-Union Council). At that time, we would have had to comply with many state demands: It concerned the training of children and their attendance at church services. That was very important to us, and that's why the brethren said at the time: We won't do it.

But afterwards, registration was possible.

Yes, during Perestroika it became possible. But the Soviet Tserkvei stuck to its position: Any kind of registration is sin. That was also the understanding of many in our congregations. But despite all that, we were allowed to do as we pleased. There were also divisions within the community and we did not want to further burden unity by breaching the issue. Without unity, we want to leave things as they now are.

What is the relationship of the Brotherhood today with the Soviet Tserkvei and the official Baptist Union?

Relations with the Soviet Tserkvei were very good until the 1980s. We often visited each other and used their (illegal) printing shop. We also supported them financially.

In the 90s, however, differences arose, especially on the theological question of purification. Our elders did not agree with their methods; it seemed to us like a Catholic or Orthodox practice. Controversies arose from this and one result was that around 1993 the congregation in Mirolyubovka split. A cooling of relations followed, which still exists to some extent. Later, there was a split in the Maryanovka church.

Could one say that today the Omsk brotherhood is situated between the Soviet Tserkvei and the registered Baptists?

Yes, you could say that. In the 1960s, relations with the registered Union were cold - they often sent people to our churches intending to convince us to register. That subject was taboo with us.

But today, that is no longer the issue. In the 90s, a liberal wave took hold of the registered churches. There were Charismatic rumblings, new types of music and clothing. The Brotherhood did not agree with this. But relations with the registered Baptist churches in neighbouring North Kazakhstan are cordial. They were not carried away to the same extent by the developments in Russia.

I know that their leader, Franz Tissen, rejects women's ordination and that is one of the reasons why the Kazakh Union distances itself from the "European Baptist Federation" (EBF).

Tissen distances himself from what is happening in Russia. Today, we Baptists are not concerned about the question of whether one is registered or not. It is now much more about questions of liberality.

Do you expect a new situation due to the ongoing political tensions between East and West?

We do not notice any strong changes yet, but the Yarovaya Laws have limited our missionary efforts. Visits from abroad are no longer possible to the same extent.

You as a church also cannot invite anyone because you are not registered.

Yes, but personal mission is not forbidden. We have enough possibilities for evangelising. We appear on radio and we distribute newspapers among the people. We are currently discussing whether we want to hold mission conventions again. We are far from using everything we have at our disposal. Today we live in a new time with new people - I see that also in the Soviet Tserkvei. Our missionary zeal has faltered. For us, state restrictions are not the main issue.

I say that boundless Russia actually consists of multiple governments. Siberia is not European Russia.

Not only Moscow is far - the Yarovaya Laws of 2016 are, too. What about real estate; who owns your church buildings?

They are still owned by private individuals. Usually they are officially private houses.

There is a lot of trouble about that right now with the local authorities in Tula and Ryazan (near Moscow).

And the Soviet Tserkvei is having problems of this nature up in Arkhangelsk. But we shouldn't rile the authorities unnecessarily. We should be wise and not just claim: “We are from God; we don't respect you." There could still be problems, but thank God that is not the issue yet.

Here, west of Omsk, everyone knows everybody. After Perestroika, was there any follow-up discussion with the people who had persecuted you? Was there reconciliation?

There were talks. We had men in Apollonovka who had persecuted eagerly. Afterwards, they admitted they had been stupid and had done evil things to others. The village chairman came to the service several times afterwards. An atheist teacher in the village converted and became a church member. We were very happy when people repented of their sins.

Afterwards, there were no more causes for tension. We believers understood that people were only small cogs in a big system, and Satan was behind this system.

(He laughs.) I have not heard of any case where anyone imagined such a thing.

Ben Goossen from Kansas has been researching the relations of the Mennonites in Ukraine to fascism. For the Nazis, the behaviour of the German Mennonites in the Diaspora was exemplary - only their pacifism was problematic. (See the release from 29 July 2017 on our website.) Mennonites helped build the Stutthof concentration camp near Danzig.

This is not an issue here. I do not know this history.

It was an important topic in 2015 at the "Mennonite World Conference" in Harrisburg/Pennsylvania.

I have been to Paraguay twice. There I learned that this had been a contentious issue in Paraguay before. But here with us, this question has not come up. It would also have been very dangerous to raise this question during the KGB-era! That would have been incredibly dangerous. The people who had been for Hitler in the past remained silent. They would never say anything about it, because they had already suffered through a long ordeal.

We had a brother in the community with the usual SS tattoo. They were boys at that time who had been deported (mostly from Ukraine) to Germany. They were then sent straight to the front and had to join the SS. They didn't have much choice.

A journalistic release for which only the author is responsible. It is informational in character and does not express the official position of any church organisation. This release may be reprinted free-of-charge if the source is cited. Release #21-10, 1.544 words.