The Catholic Church in Kaliningrad Region 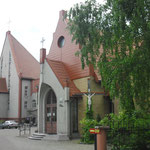 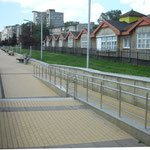 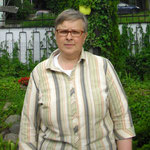 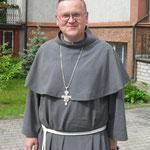 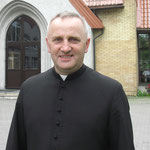 From the left: St. Adalbert's Church, promenade on the banks of the Pregel. On the right are the sheds for humanitarian goods behind the Church of the Holy Family, Sister M. Gisela, Bishop Nikolay Dubinin, Father Marek Kolodziejski

K a l i n i n g r a d -- The German Lutherans active in Kaliningrad region 20 years ago have warm memories of their cooperation with Catholics. At that time, it involved primarily the couple Helmut and Marlene Quirrenbach from the community "Lumen Christi" in Maihingen/ Swabia and Father Eduard Prawdzik, who served as priest in Gvardeysk (Tapiau). Sergey Kivenko, congregational leader in the Lutheran "Church of the Resurrection", still raves about the good cooperation with Sister M. (Maria) Gisela Noky from Wittenberg, who arrived in the region in 1999. When he headed the children's project "Yablonka"; they helped each other out with humanitarian supplies.

The author was told about the warm cooperation in the village of Lipki (Lenkimmen until 1938) south of Chernyakhovsk (Insterburg). The parish house was initially owned by the Lutherans and renovation work was done on an ecumenical basis. However, five years ago the house was sold to the Catholic church. Since roughly that time, contacts between Catholics and Lutherans have decreased markedly in the region. However, in Chernyakhovsk hearty contacts between the two churches remain.

The pandemic naturally also affected the two Catholic parishes in Kaliningrad. The second parish, which specialises in diaconia, the "Church of the Holy Family", is located on the banks of the Pregel not far from Sackheimer Gate. After March 2020 it could only close for about six weeks, as the virus had only increased the plight of the needy. Nevertheless, this congregation had to shut its doors again for a month in January 2021, as the entire senior staff - including the Belarusian priest Alexander Krevsky - had fallen ill with Covid. Sister Gisela has a colleague from her own “Schönstätter Marienschwestern”: 81-year-old Sister M. Angelika Dubau from Bautzen. Before the pandemic, 120 people gathered in this church for Sunday Mass; at present they number about 80.

The grounds of the Holy Family Church continue to appear well-kept. The sheds for humanitarian goods remain in good shape; the church’s new floor is a clear contribution to aesthetics.

The relatively low-level relations with the Orthodox remain stable. Whether or not cooperation occurs depends on the attitude of the respective local priest. Sister Gisela let it be known that a number of people have come to her for confirmation classes and then later preferred to be baptised Orthodox. "That's alright," she said, "but afterwards one shouldn't hop back-and-forth between the two churches."

For years, the Catholics struggled to regain the original Holy Family Church, consecrated in 1907. In 1980, the structure, which had just been renovated, was reopened as a concert hall and seat of the Kaliningrad Philharmonic. Yet today it is owned by the Russian Orthodox Church; no return is to be expected. A staff member assured: Our new, low-rise church "has already been in service for 30 years and can therefore not be regarded as a temporary solution". At that time, the prefabricated building had been imported from Germany.

Nikolay Dubinin (born 1973 near Rostov-on-Don) has been based in St. Petersburg since 2020 and is the bishop responsible for Kaliningrad region. In a conversation with the author, he expressed his satisfaction that local celebrities had attended the funeral service for Prelate Jerzy Steckiewicz in Kaliningrad's "Church of St. Adalbert" on 16 Dec. 2020. Among them were the young regional governor Anton Alichanov as well as Serafim (Melkonyan), the Archbishop of Kaliningrad and Baltiysk. He has been the leading Orthodox clergyman in the region since 2001. Bishop Dubinin reported that the condolences expressed were regarded as very sincere. The Pole Steckiewicz (born 1954) had been active in Kaliningrad region from the outset in July 1991.

The year 2021 marks the 30th anniversary of the official re-registration of the Roman Catholic Church throughout Russia. Steckiewicz's successor as senior clergyman in the region is his fellow Pole Father Marek Kolodziejski. He has been active in the territory since June 2016.

St. Adalbert's Church is located at Uliza Nevskogo 78 on the road to Selenogradsk (Cranz). The original church of this name, completed in 1904, is located in Amalienau district (today Prospekt Pobiedy 41). The German "Wikipedia” reported last year: "After the departure of (a) research institute, the building is being prepared for sacral use by the Russian Orthodox Church. Its eponymous, Adalbert of Prague, was an Old Prussian missionary and martyr killed in 997.

The numbers in comparison

Bishop Dubinin, an ethnic Russian, emphasised that his church does not emphasise the nationality of its members: "We do not want to be a colony of foreigners. We simply desire to aid anyone and all who live here locally."

"Out of solidarity", Catholics from all over the world flocked to the former USSR after 1991. Among the approximately 20 who currently hold full-time spiritual positions in the region include priests and members of religious orders from Poland, Lithuania, Slovakia, Germany and Belarus. The clergyman in charge of Gvardeysk happens to be Indonesian.

The first mass on Sundays in the main church is held in Polish; in the evenings, masses are held in Lithuanian several times a week in the Holy Family Church. Gatherings in Spanish, German, Slovakian and English would be possible, "but Russian remains the basic language everywhere". They are also prepared to serve foreign students - after all, Adalbert’s is located close to the university. The children's work in Mamonovo (Heiligenbeil) and elsewhere continues; the summer camp in Kulikovo (Strobjehnen), promoted by the Quirrenbach couple, is still active.

There are 14 Roman Catholic parishes in Kaliningrad region with an unconfirmed membership of 2,000. Among the best-known are the two churches in Kaliningrad, as well as Chernyakhovsk, Sovietsk (Tilsit), Gvardeysk and Znamensk (Wehlau). In 2020, the Orthodox reported 72 clergy and 12 monks in the territory; the Lutherans have four full-time clergy.

Despite bureaucratic hurdles, much has stabilised for Russia's Catholics in the last decade. Only 15 years ago, Polish priests in the region had to leave for Poland on a weekly basis. But Bishop Dubinin stressed that the restrictions of that time affected many foreigners living in the country, not only Catholics. Today, quite a few clergy have permanent residence permits. Since July 2020, it has become legally possible to take on Russian citizenship without renouncing one's original citizenship. This, too, has made life easier for Catholic clergy.

As is well known, the Kaliningrad enclave borders on two states that regard Russia as an adversary. Both states are majority Catholic. Dubinin assured: "We want to build bridges. Even if relations between states are bad, that does not stop citizens from becoming friends. Important for us is the voice of Pope Francis in his encyclical of 3 October 2020: We are all 'brothers' and we want to build a fraternal relationship on the basis. Only in this way can a humane society be created."

My comment: One can certainly assume that Catholics in Kaliningrad region desire to build bridges to the Protestants. There are many things in which Catholics - and Orthodox - could be of help to Lutherans. Let us hope for a restoration of mutual relations.

A journalistic release for which only the author is responsible. It is informational in character and does not express the official position of any church organisation. This release may be reprinted free-of-charge if the source is cited. Release #21-13, 1.167 words.