A Jewish Outpost in the Russian Far East 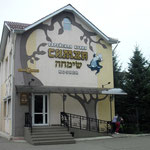 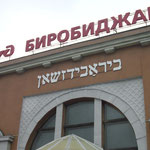 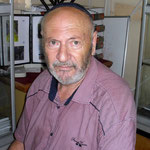 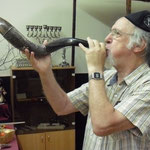 Birobidzhan will never be without Jews

L a d u s h k i n -- The Birobidzhan railway station already indicates that this town is something special: On the station wall, in addition to the usual Cyrillic letters, the city name is also emblazoned in Hebrew script! During our first short stop in this Far Eastern town 185 km west of Khabarovsk, our accompanying friend from Germany had been so excited that he immediately departed on a camera tour. His re-entry onto the train, which had already almost left, was correspondingly quick.

During a second, stress-free stay three years later in July 2021, I noted that some street and business names are also bilingual. On the other, street side of the rail station, there is a fountain with the menorah, the seven-branched candlestick. On Lenin Street, the city sports a kind of Jewish quarter with a cultural centre, an unofficial Israeli consulate, kosher restaurant, museum and synagogue. There is also a newspaper and radio broadcasts in Yiddish.

In the course of Stalin's nationalities policy, a "Jewish Autonomous Oblast" had been created in May 1934. (The Volga German Republic had seen the light of day ten years previous.) After the first wave of persecution, the oblast still had a Jewish population share of 16% in 1939 - today that share is 0,9% with a downward trend. With a city population of around 72.000, this amounts to 648 residents of Jewish nationality. With the Chinese minority on the other hand, the situation is different: It already amounts to several percentage points with a strongly upward trend.

The immigration of Jews to the area had already begun by 1924. In 1928, a kibbutz called "Ikor" had even been founded, which existed until 1939. There’s a Russian-language book on the topic.

The retired lecturer and tourist guide at the Jewish museum, Boris Mikhailovich Golub, stated that around 10 people attend the main weekly service. But on holidays, there can be hundreds in attendance. During my weekday visit to the almost new synagogue, a man was seen wearing the leather prayer straps, the Tefellin.

The always-obliging Boris Golub did not want to commit himself to numbers. "Who is actually a Jew and who is not?" he asked. "After all, many thousands of Jews only discovered their Jewish roots after the end of communism." He cited in this context a local joke: It will be Jews who will be seeing off the very last Jew as he departs from the railway station.

The lecturer assured that a unique feature of Judaism was that it had no ready answers on matters of faith. Mr. Golub revealed thereby that he is by no means an Orthodox Jew.

At least until Corona, relations with Israel were relatively close. Cultural exchange flourished. Serious medical cases were treated in Israel; the lecturer himself has already visited the promised land five times. He insisted that his oblast was the only territorial region outside of Israel with a form of Jewish statehood.

Despite its special status, the oblast was not immune to Stalinist persecution. My host spoke of two waves of repression: in 1937 and the so-called conspiracy of Jewish doctors in 1951. But today, the area benefits from the Kremlin's sophisticated foreign policy towards Israel. Although Israel and Russia are on opposite sides of the barricades on the West Bank and Syria, the two states manage to conduct a thoroughly tolerable policy towards each other. Boris Golub appreciates the fact that in January 2020 Vladimir Putin attended the Jerusalem opening of a memorial in honour of the victims of the Leningrad blockade.

Conclusion: This officially Jewish region would remind a German of the Sorb territory in the East German Lausitz. Without irony, it is indeed a tourist trap of the best sort. The multiculturalism on display is highly photogenic, but in terms of content, there is little local knowledge of Jewish culture and language. But the region undoubtedly contributes to smoothing the global relationship between Jews and Russians.

A journalistic release for which only the author is responsible. It is informational in character and does not express the official position of any church organisation. This release may be reprinted free-of-charge if the source is cited. Release #21-17, 652 words.