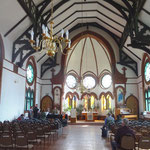 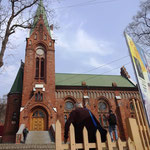 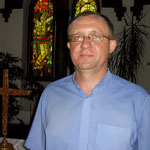 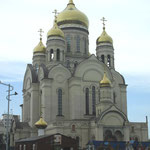 The first two photos of St. Paul's are from April 2018. The photos of Vitali Mohr and the brand-new Orthodox cathedral on Vladivostok's central marketplace are from July 2021. All photos are from Yoder.

L a d u s h k i n -- Since the beginning of 2021, the well-known Lutheran "St. Paul's Church" in the Far Eastern city of Vladivostok has a new pastor: the newlywed, 1976-born Vitali Mohr ("Moor" in Russian). His inauguration took place on 14 February 2021. He succeeded the Hamburg pastor Manfred Brockmann, who had held this office since 1992 and contributed significantly to the reconstruction of the Vladivostok congregation and church. Brockmann (born 1937) and his Russian wife continue to live in the city. It was not until April 2021 that Mohr married Natalia in Tomsk.

It is actually thanks to two women, the Holy Spirit and a missionary from Germany, that Vitali Mohr found his way to the faith. The women are his Lutheran mother and grandmother who taught him the faith in his younger years in the city of Barnaul/Altai. Around 1997, he heard on the local radio that the Barnaul German-Russian House was offering Lutheran worship services. Friedrich Gerber, a missionary from Mainz, was partially responsible for this work.

Mohr graduated from Barnaul University with a degree in German studies and began working at the German-Russian House. But already in 2002, mother and son decided to emigrate to Germany together; a return to Russia was not planned. Accordingly, the theologian applied for German citizenship; today he has two passports. At first, mother and son lived in Berlin-Spandau, but soon he moved to relatives in the Hamburg area. His mother still resides in Berlin.

It was partly thanks to Pastor Gerber that Vitali Mohr immediately began studying theology at the well-known, 1849-founded "Missionsseminar Hermannsburg" in the Lüneburg Heath. This study was then protracted for private reasons - he only graduated in 2011. Vladivostok is not an unknown place for Mohr: After graduation, he had done a five-month internship there under the direction of Pastor Brockmann. This was followed by a three-year vicariate in Cadenberge near Cuxhaven/Germany - this regular, German-speaking congregation belongs to the Provincial Church of Hanover. In 2015, he was then called as pastor to the congregation of Tomsk (north of Novosibirsk) in Russia.

Why was Vitali Mohr open to returning to Russia, far from his relatives in Germany? His has a simple answer: "Hermannsburg has a missionary orientation and graduates are expected to serve abroad." At that time, Russia was one of the seminary's highest priorities and it made great sense to send a Russian-German graduate there.

At that time, an ordained pastor was needed in Tomsk to stabilise the situation in the parish. There, Russian state funds had been used to build within five months a wooden church in honour of German Chancellor Angela Merkel. Within the framework of German-Russian consultations, this pastor's daughter then attended the inauguration on 27 April 2006. This was a major event for Tomsk’s Lutherans for the original "St. Mary's Church" had been demolished without replacement in 1936.

In a flight of Christian non-fraternity, the "Evangelical-Lutheran Church of Siberia" led by Vsevolod Lytkin quickly snatched up this gem. This small denomination, based in Akademgorodok near Novosibirsk, is linked to the Lutheran Church of Estonia and the conservative-oppositional "Wisconsin Synod" in the USA. The internationally-recognised Omsk-based "Evangelical Lutheran Church of the Urals, Siberia and the Far East" had actually been targeted as the owner of the new St. Mary's Church, but instead the small denomination has remained the official owner to this day. However, existing circumstances have ensured that the Lutheran congregations of two denominations may call this building home. It was precisely these tensions that had caused the aforementioned instability. At Mohr's departure, he was able to pass on the baton to Dmitry Driugin, a trained and-ordained local Lutheran pastor.

What are Pastor Mohr's hopes for his new congregation? The youth and children's work as well as the choir are to receive new impetus; concerts continue to take place in the church roughly every 14 days. Since it is a worthy sight in itself, St. Paul's Church automatically attracts Russian and foreign tourists. Opened in 1909, it is the city’s oldest church. Since the city is a centre for the exchange of people and goods with China, Japan and Korea, many more international church encounters are conceivable. Visits from neighbouring Chinese congregations have already taken place. Good relations with the Catholic community exist, but local ecumenical relations need further development. On occasion, other Protestant denominations rent the Lutheran house of worship for weddings.

Perhaps the geographical location is both an advantage and a disadvantage: Tomsk is only halfway between Germany and Vladivostok. Wife Natalia Mohr has spent her entire life in Tomsk and has not yet been able to organise her move to Vladivostok.

The Far Eastern deanery of this Omsk-based church could at the same time be considered the largest or smallest deanery in the world. It is territorially huge, but has a membership in the low, three-digit range. Seven of its nine congregations between Chita and the Pacific are classified as house communities without their own church building - and the congregations in Magadan and Komsomolsk-am-Amur are on the verge of closure.

Since April 2021, the deanery has officially been without a dean: At the request of his German employer, the busy US-American Bradn Buerkle (Moscow) has withdrawn from this function. For the time being, Mohr is only responsible for Vladivostok; in fact, Buerkle continues to be involved in the congregational happenings in the Far East. The harvest (or tasks) are indeed great, but the labourers are few.

A journalistic release for which only the author is responsible. It is informational in character and does not express the official position of any church organisation. This release may be reprinted free-of-charge if the source is cited. Release #21-18, 907 words.