Baptists – Champions of the Belarusian Nation 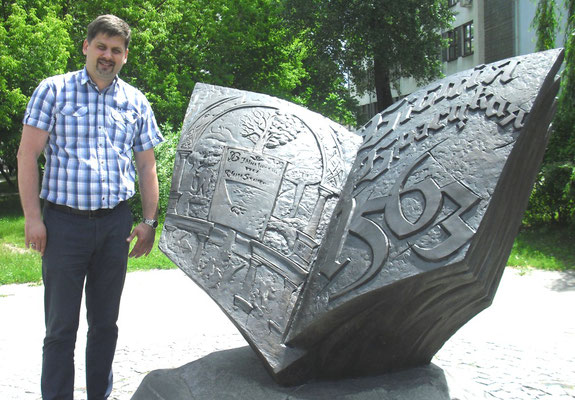 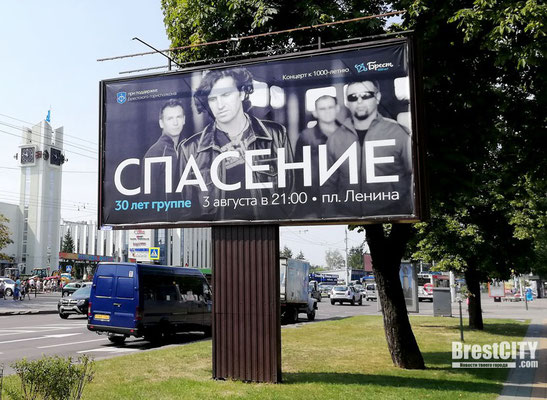 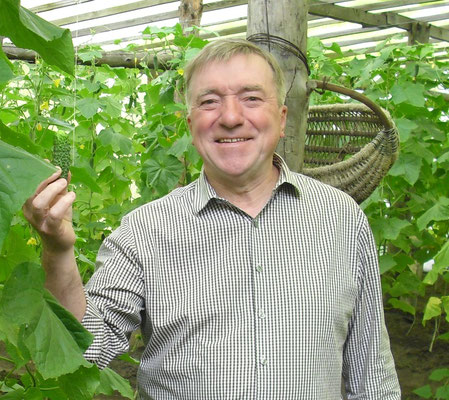 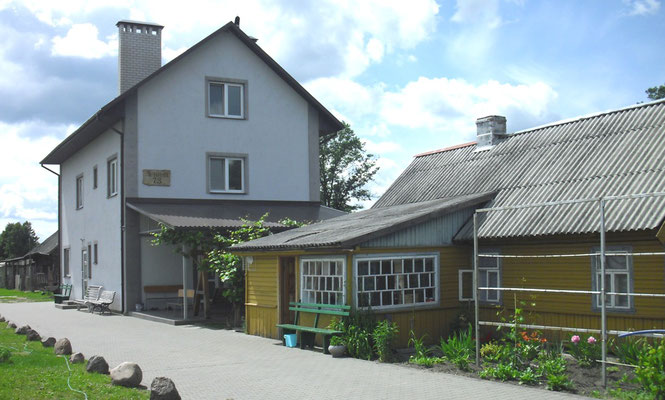 1. Siarhej Brishtel with the monument to the "Brest Bible" in front of the city library

2. Advertising for a major concert of "Spasenie" in Brest on 3 August 2019

3. Vasily Kreidich in the greenhouse at the rehabilition centre in Velikorita

4. A portion of the rehab centre in Velikorita

L a d u s h k i n -- The Protestants of Brest are championing the city’s Belarusian heritage. Foreign visitors are quickly shown the attractive Bible monument installed in front of city library in 2017. Its instalment had been funded jointly by Protestant congregations and the city. Prominent on the monument is the date of 1563, the year in which the “Brest Bible” was published. It was the world’s first Protestant translation of the Bible into Polish, created at the time Brest was part of the Grand Duchy of Lithuania. Maker-and-shaker behind the undertaking was Mikolaj “The Black” Radziwill (1515-1565), a leading Polish-Lithuanian nobleman and Calvinist convert. Yet the Polish Counterreformation got into full swing late in the 16th century and the flowering of the Polish Reformation was over after little more than a generation.

The first translation of a portion of the Bible into Old-Belarusian had already been published in Prague in 1517. The translator was Francysk Skaryna (transcriptions vary), apparently a Roman Catholic with Orthodox connections. Pastor Siarhej Brishtel, a Baptist proponent of the move to champion the Protestant heritage of Brest, is quick to point out that Skaryna’s work appeared several months before Martin Luther nailed his 95 theses to the church door in October 1517.

Belarusian churches pushed a Year of the Bible in 2017; numerous events in connection with it were broadcast by state media. A Bible exhibition followed in Brest in late 2021. (Though invited, the Roman Catholic and Orthodox churches did not officially participate.) Baptists were involved in the creation of the city’s new logo; the text of one of them reads: “Brest - City of the Bible”.

Brishtel stresses that the Bible is an element which unites all Christians and virtually all of Brest’s Protestant denominations – except for two congregations of unregistered Baptists – participated in the recent Bible exhibitions. Brest is unique in that it features excellent relations between the 19 differing Protestant congregations. The visit of evangelist Nick Vujicic to Brest in September 2017 – he was born without limbs - remains unforgotten: 3.500 attended the events sponsored by virtually all Protestant denominations. Brishtel asserts that Protestants want to be a bridge, and the celebration of Brest history and tradition has indeed served as a bridge to the local government. Since the Belarusian identity is neither clearly Catholic nor Orthodox, it offers Protestant an opportunity to fill a rare vacuum in the Slavic world.

My commentary: There is nevertheless a trade-off involved: The push for „Belarusianism“ places the residents of Western Belarus – the territory was a part of the Polish state between the two World Wars - somewhere between the Western and Eastern Slavic worlds. Protestant, Belarusian patriots tend to regard Catholicism as Polish and Orthodoxy as Russian; their relations with these two arms of the Christian faith are consequently cool. Belarusian patriots reject a second push for “brotherhood”: “Rus”, the special relationship between the Belarusian, Ukrainian and Russian nations sponsored by the Moscow Patriarchate. Naturally, drawing closer to certain societal groupings will increase the distance to others.

The Protestant scene in Brest

The region of Brest has become a kind of Bible belt and “Spasenie” (Salvation), one of the 11 Baptist congregations in the city, has contributed to that upturn. The church has 500 members and its main sanctuary in the Ulitsa Skripinkova 45a looks like a gymnasium and does double duty as a basketball court. “Spasenie” began by meeting in an army tent with virtually no members; it was officially registered only in 1996. The congregation formed a well-known music group by the same name; its senior pastor, Alexander Borisiuk, remains one of its primary songwriters. Have a listen in Belarusian at: “www.youtube.com/watch?v=KGimf1bM0-I”.

Since very few of its members have a Protestant background, young Baptist ladies in this congregation can dig heavy metal and torn jeans without needing to become Pentecostal, which is frequently the case in Russia. In 2013, Christian hard-rock bands from the West were part of a state-run, city-wide music festival. Their dry ice fog, high-decibel sound and crazy hairdos created scenes uncommon among the Protestants of Eastern Europe.

Relations with the city authorities are normal and correct. “Spasenie” takes on more than a few social tasks including drug rehabilitation, pregnant mothers, child education and sport.

The scene is a bit different among Pentecostals, who stress Brest and its unique history somewhat less. Its one-thousand-member “Church of Christians of Evangelical Faith” also began its existence in tents – in 1968. Its massive sanctuary church on Ulitsa Tsentralnaya 1 is located on the eastern outskirts of the city. The energetic senior pastor, Vasily Kreidich, is more than a bit out-going. A recent event attracted 500 children and new buildings are being built to house an educational programme for them.

Its bright rehab centre at Velikorita 25 km southeast of the city is currently home to 17 male and three female residents. Pentecostals have a net of 20 centres spread throughout the country. The current programme entails four initial months at Velikorita followed by eight more at Baranovichi on the road to Minsk, and a final four months in Velikorita. One-third of the residents end up clean of substance abuse for life.

The staff at Velikorita confirmed that substance abuse remains on the increase in Belarus; most centres are confronted with lines of applicants. A staff member noted that Orthodox monasteries also tend to take in “addicts”. They stem though usually from the circles of less-serious abusers. The state offers little more than medical care; the spiritual and psychological needs of these persons are not addressed.

Pastor Kreidich pointed out a large empty school building also to the east of Brest. Closed only a year ago, the school features 15 large rooms as well as a kitchen and gymnasium. The asking price is only 25.000 in Belarusian roubles: approx. $10.000 US. The pastor would love to have the grounds for his child and adult programmes; he’s praying that no other party will snatch the prize from his grip. “It’s the money issue which is always holding us back,” he complains.

Brest also remains of major centre for the work of the evangelical “Trans World Radio”. Krasnoyarsk in Siberia remains its only major Russian centre. TWR programmes from Brest and Krasnoyarsk are being broadcast from Tartu in Estonia and Grigoriopol in the pro-Russian, breakaway separatist republic of Transnistria. Internet access is also readily available.

The long lines of cars near the Brest Fortress waiting for many hours to enter Poland point to the profoundly anti-ecological nature of sanctions, even when promulgated by Green parties. The lines are due in part to the total lack of passenger trains running westward from Brest. A plane flight from Minsk to Kaliningrad in Russia looks like a giant horseshoe, as the flights are forced to detour via St. Petersburg and the Baltic Sea.

The border between Belarus and Ukraine is closed for Belarusians; anyone hoping to travel from Belarus to Ukraine by car or bus must make a detour through Poland. That shutdown is particularly painful for the Protestants of Kobrin in Belarus und Rovno (Rivno) in Ukraine, as both parties have a long history of mutual family, church and business relations.

Nevertheless, after over four months of major war activity, life in Belarus’ border regions appears remarkably normal. Over 90% of the cars waiting at the Polish border near Brest have Belarusian tags; the remainder are a sprinkling of Polish, Ukrainian and Russian ones.

Belarusians with Polish identity cards remain free to travel, work and study there without endangering their status back home in Belarus. Identity cards are usually available to all born in Brest or other, once-Polish regions of Western Belarus. Baptists from my circle of acquaintances are planning for summer vacations in Belgium, Portugal, Italy and Greece.

Western visitors in Belarus are rare but on the increase. Since Minsk airport is virtually closed to flights from the West, visitors are being allowed to enter by road through Brest. A young lady from Minnesota for ex. is serving for several months at the Baptist “Zhemchushinka” children’s camp near Kobrin.

Not all sanctions on Russia and Belarus are the same: The golden arches (McDonalds) remain prominent in Belarus.

When I unexpectedly popped up at the afore-mentioned “Church of Christians of Evangelical Faith”, our first topic was North Port in Florida. A stronghold of Slavic evangelical life, more than a few Brest Pentecostals have set up shop there. Ukrainians and Belarusians are elbowing for room in Poland. Belarusians report that 350 persons are attending a Baptist congregation in Cracau – up from 60 in more peaceful times. Belarusians are gathering to worship in their own tongue (mostly Russian) in Poland, for ex. in the large Baptist church in Bialystok.

Up to 30% of evangelical church members have headed westward; Minsk’s “Svet Istiny” (Light of Truth) Baptist congregation has lost five of its six deacons. Siarhej Brishtel expressed the matter in a highly-diplomatic fashion: “More of our members than desired are currently residing in Poland.” Yet in trying times, fresh faces are constantly appearing in worship services.

Refugees from Ukraine ending up in Belarus usually prefer to continue fleeing further westward to Poland or Germany. After all, Belarus has no access to EU relief funding. Tashkent in Uzbekistan appears to have become a centre for Belarusian IT-work. Because of information and money issues, Western employers are expecting their employees to transfer to sanction-free countries.

Actually, Belarusian society has been hit by two recent emigration waves among the young. The first one occurred after the street protests of 2020; the second, following Russia’s attack in Eastern Ukraine in February of this year. The second wave occurred because young males feared Belarus being drawn into the Ukrainian conflict. A young Minsk Baptist couple of my acquaintance spent three months waiting in Tbilisi/Georgia. Yet in the meantime, President Alexander Lukashenko has indicated strong resistance to active involvement in the conflict. That couple – and others – have consequently returned home to Belarus.

Amazingly, despite the major brain drain, the lights are on and the trains still running in clean, currently green-and-beautiful Belarus. Belarus is no German Democratic Republic, for its authorities have wisely not attempted to halt the exit of the young. A safety valve to release undue pressure remains.

Yet even the peacetime, of which we all dream, casts a dark shadow on the horizon. Belarusians report of Ukrainian Baptists in Poland very unhappy with Moldovan refugees who insisted on conversing in Russian. On his 58th birthday, 31 March, leading Ukrainian Baptist preacher and politician Oleksandr Turchynov was filmed stabbing a cake bearing an image of Vladimir Putin. The road to reconciliation will in any case be both extremely necessary and rocky.

A journalistic release for which only the author is responsible. It is informational in character and does not express the official position of any church organisation. This release may be reprinted free-of-charge if the source is cited. Release #22-12, 1.778 words.